THE IMPORTANCE OF THE GRADER AND GRADE CONSISTENCY

A thorough understanding of the general characteristics, dressing and chilling practices and presentation as they pertain to the harvest of a beef carcass is critical for consistent assessment of the grade Requirements.

Every carcass bears a commercial value based on its quality and yield as assessed at a specific time and location. It is imperative that each carcass assessment be accurate and consistent within the Requirements.

TO CORRECTLY ASSESS A CARCASS, THE FOLLOWING ARE NECESSARY: 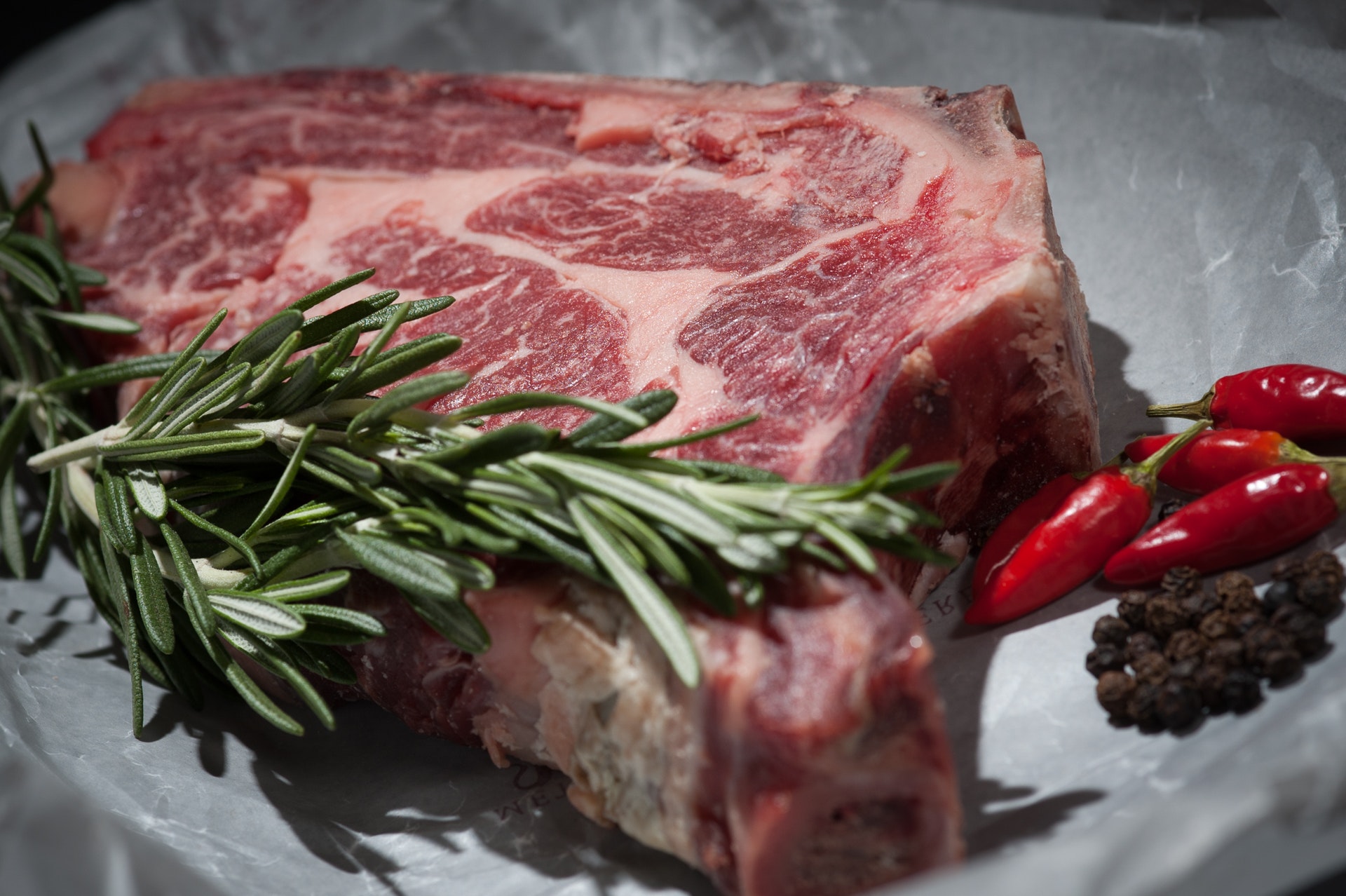 HOW BEEF IS GRADED

A carcass may only be graded after it has been inspected and approved for health and safety standards. A designated grader assesses a carcass based on several criteria which are scientifically proven to influence either carcass quality and/or yield. When available, approved objective technologies to assess required factors in a beef carcass may be utilized as a tool to facilitate consistent grading.

In the age of technology, it is no longer mandatory to physically stamp a carcass with the grade and yield symbol. Data capture systems exist that ensure grade integrity throughout the manufacturing process and for market settlement back to the producer. As long as these systems are documented and monitored by the grader to ensure grade name integrity, stamping is optional. However, when grade stamping is requested it is done as clearly and neatly as possible so that the grade name is easily recognized.

When beef is fabricated into wholesale and/or retail cuts, the grade label on the box must correspond to the grade assessed for the carcass verified either through the stamp or data capture system. The designation “or Higher” is allowed if a box contains assorted product that includes more than one of Canada A grades (A, AA, AAA and Prime). The label on a box of mixed A grades must reflect the lowest marbled grade contained in the box.

The final grade is always overseen/approved by a CBGA certified and CFIA designated grader, who are able to, if necessary, overrule the camera’s grading scores should they not be accurate.

Beef which is imported into Canada must be inspected but does not have to be graded. The Safe Food for Canadians Regulations require that containers of imported beef must bear the grade name from the country of origin or be identified as ungraded beef.

GRADE EQUIVALENCY WITH THE UNITED STATES

The North American market for beef is integrated. Using the same marbling standards for USDA Prime, Choice and Select as those used for Canada Prime, Canada AAA and Canada AA, respectively, and using the same yield classes provides marketing transparency across the border. 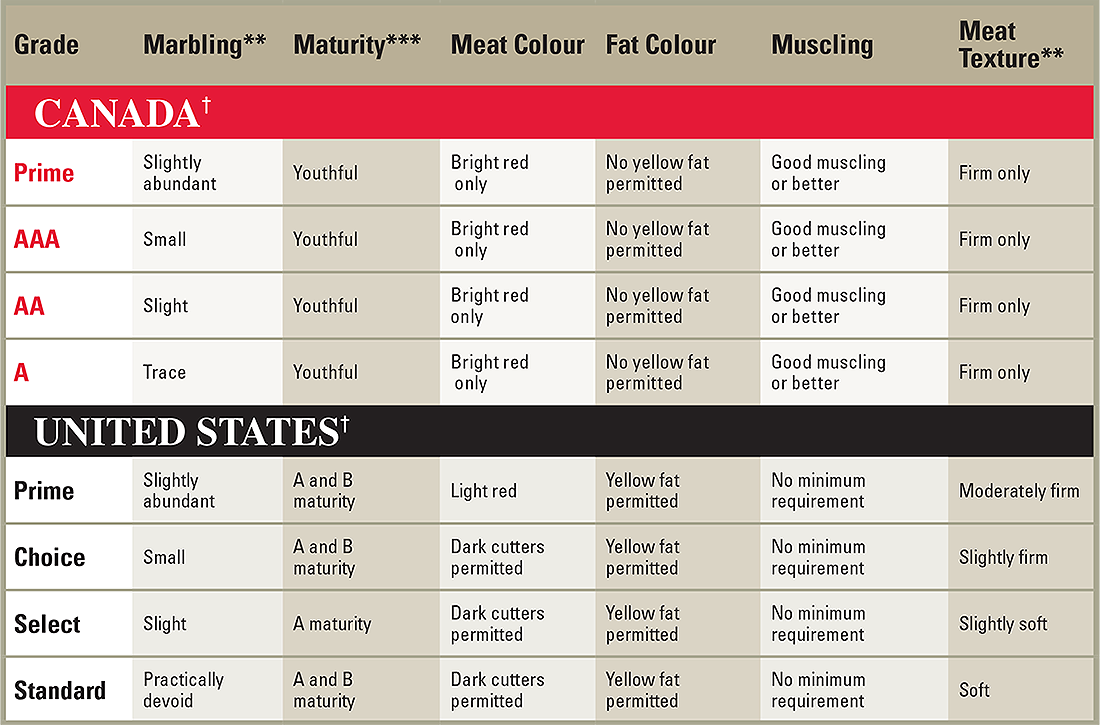 The required factors used in grade assessment (shown in chart) are directly related to the tenderness, juiciness, flavour, consumer acceptability, shelf life and cut yield. The areas highlighted in red represent the distinguishing criteria which eliminates the carcass from the quality grades A or higher. 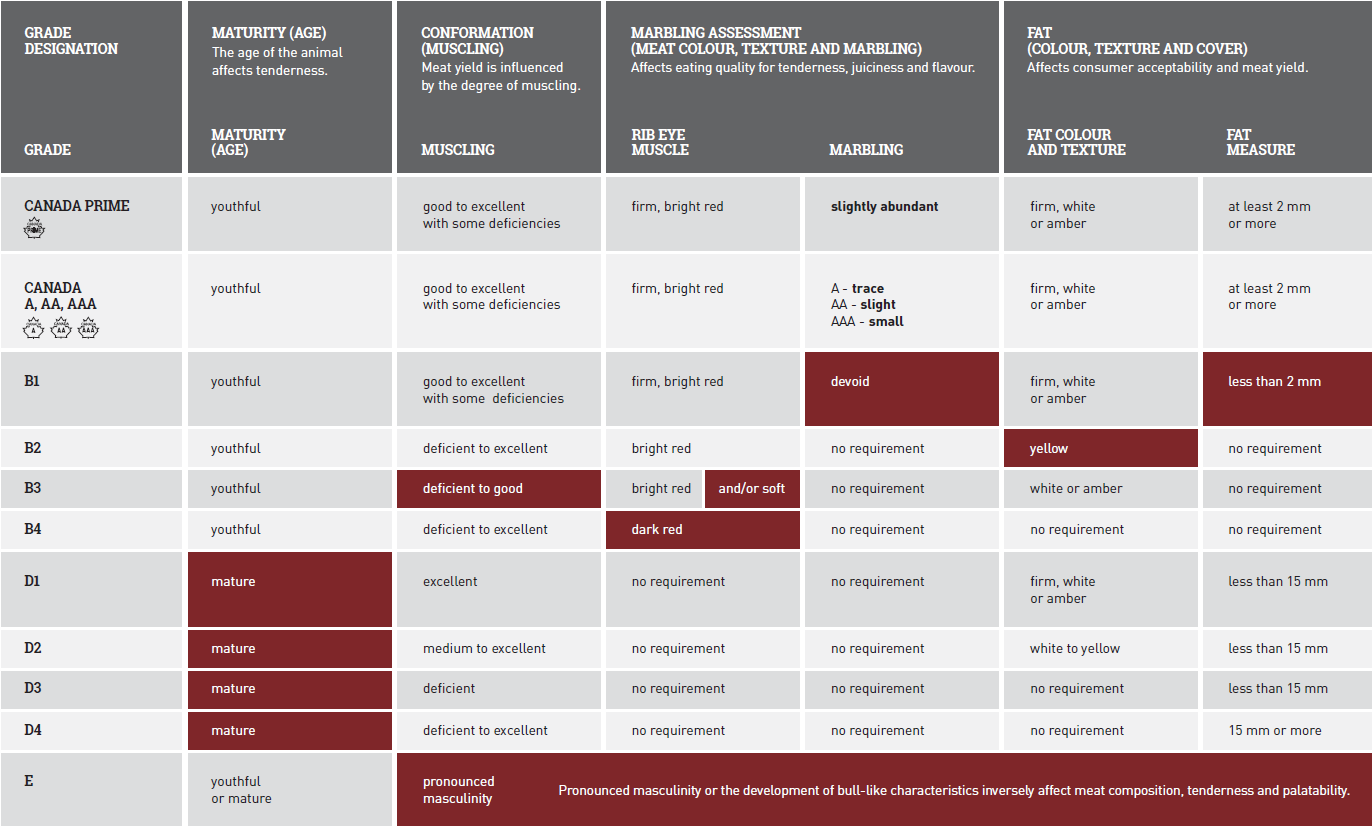 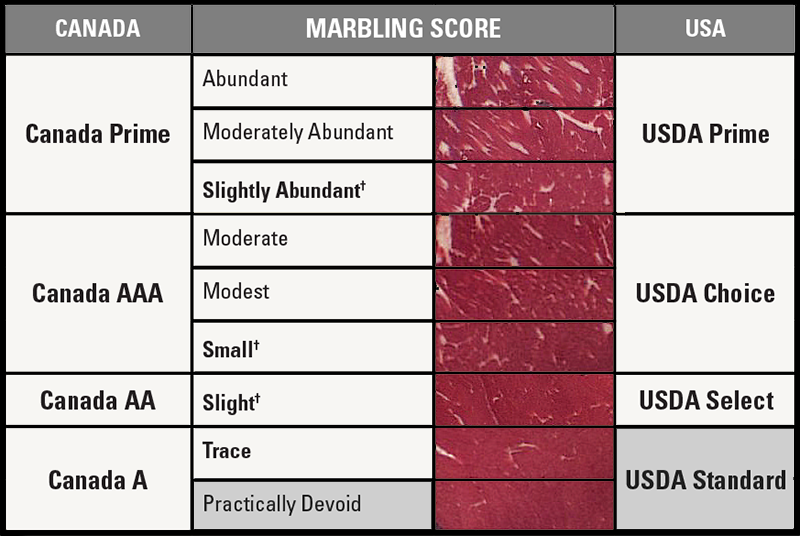 † The above illustrations are reduced reproductions of the official USDA Marbling photographs prepared for the U.S. Department of Agriculture by and available from the National Cattlemen’s Beef Association. 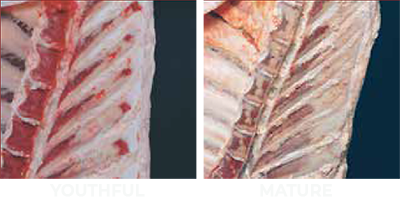 Dark red (the determining factor in a B4 Grade) is established by comparison with a standardized CBGA colour chit identified as Borderline.

When the rib eye is compared to the colour chit and is equal to or darker, the carcass is assessed as a dark cutter. Dark cutters have a reduced shelf life. 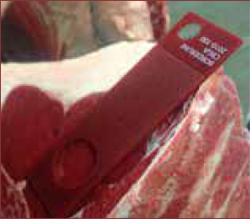 Consumers consider meat and fat color as important indicators of beef quality. To qualify as Canada A, Canada AA, Canada AAA or Canada Prime, fat cannot have a yellow tinge and must also be assessed as firm and consistent. Optimal fat cover enables the carcass to cool in a way which maximizes eating quality. 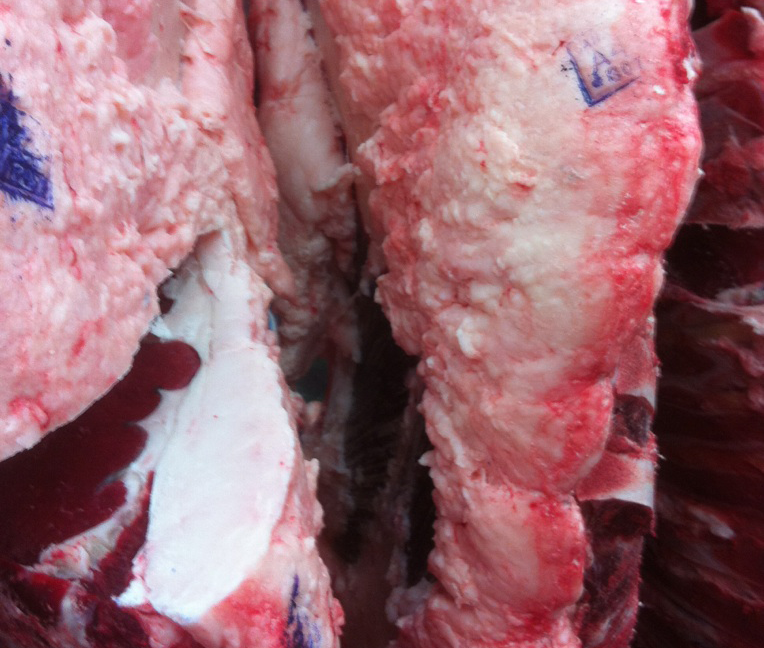 When a carcass qualifies for Canada Prime or any of the Canada A grades, a prediction of retail cut yield percentage, an estimation of closely trimmed (0.5 inch or 13 mm fat or less) boneless retail cuts from the four primal cuts (round, loin, rib and chuck) is made.

The method that is used to estimate retail cut yield was developed in the United States and adapted by Agriculture and Agri-food Canada, Lacombe Research and Development Centre, and implemented in January 2019. Yield class reported back to the producer will facilitate informed management decisions, providing the opportunity to identify feed efficiencies and desirable genetics. Yield class can facilitate packer segregation of carcasses for higher processing efficiencies.

The yield class reported by the grader is a prediction of the percentage of retail cut yield in a carcass.

To determine whether the Yield Class is 1, 2, 3, 4, or 5, the ruler is applied to the surface that is exposed when the carcass is ribbed between the 12th and 13th ribs. 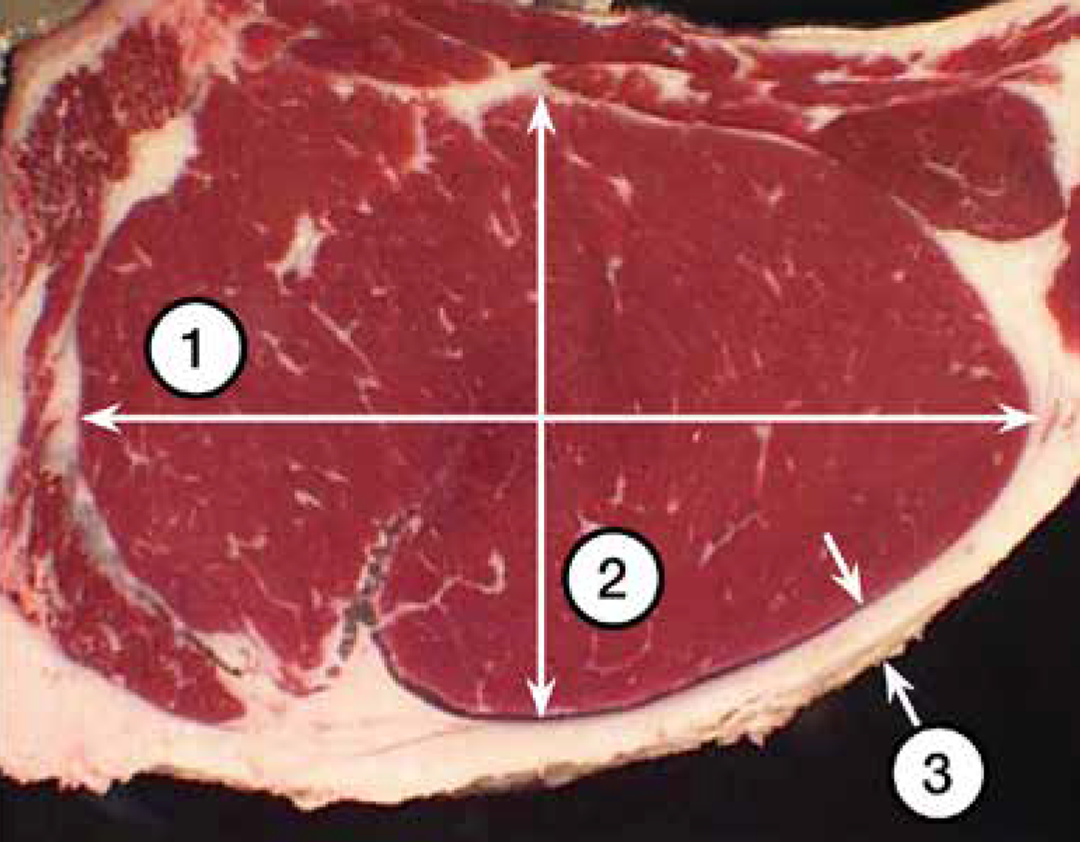 One development in the Canadian Grading System was implementation of the computer vision grading system e+v Technology (VIA technology: VBS 2000, E+V GmbH, Germany). The system’s original LED cameras have since been updated with digital (GigE) cameras. Computer vision grading technology enables multiple measurements of yield and quality grade parameters to be made more quickly than would be possible using manual approaches. Further, the digital format of the carcass data enables the information to be stored in industry databases such as BIXS.

It marked the first major advancement in the Canadian system since the Computer Vision System (CVS) camera was introduced in 1999. The e+v technology is approved for use as a grading aid by the Canadian Food Inspection Agency and enables improved grading accuracy under current grading regulations. The final grade is always overseen/approved by a CBGA certified and CFIA designated grader, who are able to, if necessary, override the camera’s grading scores should they not be accurate.

In Canada, the e+v grading instrument is a stationary machine that photographs and analyses the rib eye area between the 12th and 13th ribs of both sides of each carcass as it passes by on a moving rail. At present, the computer grading camera measures grade fat, rib eye width, rib eye length, and calculates a retail cut yield, providing a yield class and a marbling score which equates to a quality grade. Once approved, there are regular audits and oversight of the technology to insure its accuracies and compliance as set forth in the Packer-Agency Contract, Schedule B-I “Requirements for Instrument Augmented Grading”.

Currently, four establishments in Canada have a moving rail – JBS (formally XL Beef) in Brooks, Cargill High River, Cargill Guelph, and Harmony Beef in Balzac, all have installed the instrument but the JBS facility was the first, and continues to be the only to use it to augment beef carcass grading. While the other facilities have utilized the technology for “in-house” purposes over the past years, there are currently others now at various stages of the adoption of computer vision systems as an aide in grading at their establishments.

The technology is objective and assesses marbling under the same light and at the same distance from the rib eye based on minute calculations of red and white pixels within the traced muscle. The information captured can be stored, shared and further analyzed. 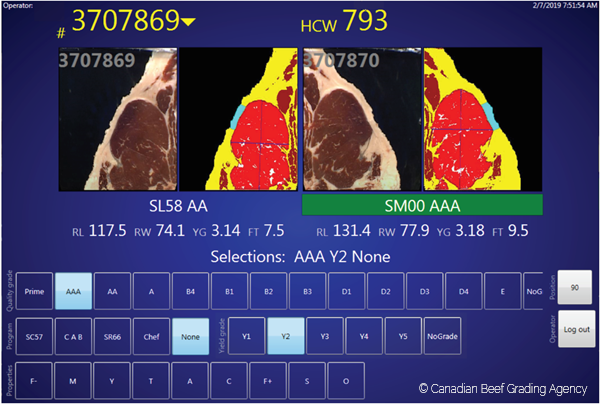 The above image is showing a grading screen from the e+v  system.

Making Changes To Grade Requirements
Who Are The CBGA?